They say the first step is the hardest

That is me a week into the ten month expedition and things are starting to settle in. I considered this a practice week if you like. Time to get used to the bike, the weight and the idea of being on the road for 20,000 miles. Also to see if anyone would join me for five miles. So far so good.

However during the ride I have been wondering what exactly is the first hard step? At what point does it happen? For me would it have been the stage when the idea was formed in the Himalayas? Strangely that was almost a formality for me. It was decided in a instance and I continued my trek without a second thought. Certainly it did not seem a hard step.

Would it then have been the stage when I got home and had to come up with the 'plan' of how I would do this? This resulted in numerous challenges. Like learning how to build a website, use social networks, creating a blog, getting in the media, make contacts with many organisations, researching and sourcing equipment, training, route planning, sorting out visas and the hardest challenge of them all the funding. These were all tough and I have been more successful at some of the tasks than others. But I would not consider any of these tasks as the first step and everything else fell into place after it.

Maybe it was the first 5 miles of pedalling away from Glasgow? Nope, this had a feeling of relief more than anything. The weeks building up to the start were unfortunately stressful. I still needed visas, equipment and doubted anyone would like to join me. Add to this the challenge of working seven days a week. So that first pedal out of Glasgow's George Square with five other cyclists was a great moment.

Maybe then the hardest step is the last. The challenge involves huge commitment and sacrifices and then it finishes and you are left with the question- What next?

For me obviously this is not a concern. What is next? The answer is easy: Ride 20,000miles, raise money for UNICEF and get as many people as I can to join me for 5 miles.

Thanks so far goes to Ken, Iain and David for riding with me in and around Newcastle. To Ellis the kind cycling fanatic that treated me to beers, steak and a night indoors. To Dan MArtin for a great night. Thanks to all his stories of adventures I certainly have a lot to think about!

So tomorrow I set off to Harwich and then Holland. The long ride to the next commonwealth nation begins and maybe a conclusion on what is the first hard step.
Posted by Sean Newall at 08:28 No comments:

Labels: Cycling around the world, England, the commonwealth Challenge 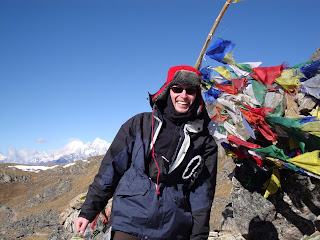 Finally I have got round to finishing the story that put me on the road to starting the Commonwealth Challenge. I had left Pinny in Kathmandu over a week previous to this moment and was nearing the end of a 100km solo trek in the Himalayas.

There I was stuck in a moment of beauty. To the west the sun was sinking. It burned red, setting the Lingtang mountain range ablaze turning the shimmering jagged white peaks into glowing orange embers of rugged light. Behind me lay the 4610m Himalayan pass with scenery stolen straight out of a lord of the rings film, that I had negotiated only hours before hand. Below the route to the bus journey back to Kathmandu. Effectively the end of this journey.

I had it all to myself. Be it a trick of the topography or maybe fate. But I was having a selfish moment with the planet and this 360 degree panorama of wonder was for my eyes only. From all the billions of people that share the planet with me none were here for this. It was overwhelming and inspiring. It was the last few days of my 'Half Ass the Himalayas' expedition. But this moment would be the spark for me taking on the Commonwealth Challenge. This was the moment that I call the Himalayan Dream.

It wasn't that I was overcome by a moment of hippy madness but more so that this was the first time during the expedition that I stopped to reflect on the experience. I had worked hard to get to this location and I intended to enjoy the moment and take it all in. This gave me time to reflect on the experiences of the last few weeks. From heartbreak to the Himalayas, a night in jail to a night in the jungle, from the wonder of the Taj Mahal to the majesty of the Kathmandu valley. All these were amazing experiences that were all unplanned and unexpected.

It was these experiences that demonstrated to myself of what I was capable of doing with very little preparation. It made me wonder what would be possible if I really tried. It also made me realise that this was something that I really enjoyed and I knew it was going to something I would do again. Then and there I decided to take on something huge.

Unfortunately I can't respond with a blasé approach that I decided to do this for a bet, a race or cause of some crazy plan concocted after a few beers. Nope the sun was setting somewhere beautiful and I made the decision to take on the challenge of visiting the commonwealth nations coming to Glasgow for the 2014 games.

As the sun began to sink further I resumed my trek downhill. It was time to start planning the next challenge.

On the 23rd of July all this planning will be tested when I begin the 20,000 mile world cycle. I hope to see some of you there for five miles and many more along the way!
Posted by Sean Newall at 14:10 No comments: