Leave before Moscow makes you soft! 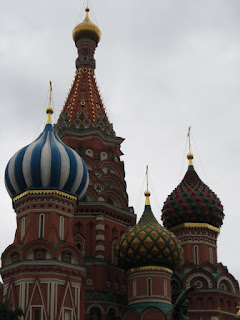 Do you know the Baz Lurman song: Everybody’s Free? You know he reminds us to wear sun cream? Aside from reminding us of the importance of protecting our skin from the sun he also suggests a list of experiences to try in life. For instance, do one thing every day that scares you. Oh and of course get plenty of calcium. He also suggests something along the lines of living in New York once but leave before it makes you hard and live in London once but leave before it makes you soft. Well Moscow is like London.
It is time to hit the road again. The appeal of going back out into the tent in the cold and riding each day in the rain is starting to thin. Not because that bothers me. No it is because the welcoming I have experienced in Moscow has been so great, I don’t want to leave. My expectation of arriving at a grey, cold, paranoid city of Russians that dislike the west has been shattered.
Everyone is friendly, helpful and welcoming. Each day I have been treated to amazing Russian cuisine and traditions. I have been given a warm bed and had countless warm showers at no cost. I have found out a huge amount about a culture that is so similar yet different to my own. The city itself is so easily accessible by metro that in the short time that I have been here I have seen a lot. The Kremlin, Saint Basils Cathedral, Victory Park, VDNKh, the war museum, Catherine the greats Palace and the must see Red Square. I could quite happily stay here for a lot longer. Learn Russian, ride the metro some more and maybe get a Russian bride!
I have been almost disappointed that I haven’t been able to find much of the cities’ relatively recent communist history. No instead I have been treated to a modern city of contradiction. Lamborghinis drive along side Ladas. Modern sky scrapers stand aside communist era blocks of flats. This is a city that has many, many, many (US) dollar billionaires but a monthly minimum wage of just over $180. This does not mean by anyway that this is a cheap city, anything but and it far exceeds my budget. So how have I managed to stay here?
This is all due to my good friend Irina. Strangely we met on a summer camp in America some six years ago and since then haven’t really had much contact. If it wasn’t for social networking I doubt we would have made contact again. When I found out that she now calls Moscow home through Facebook. It didn’t require much thought to make this a dot on the map on the route to Delhi.
Why come to Russia? The obvious answer would be to see the country. The more in-depth answer is to experience a different Commonwealth System. The majority of the previous U.S.S.R nations are part of the Commonwealth of Independent States (C.I.S). This is the closest to a contrast between the Commonwealth of nations that Scotland is a member of. So far it has been interesting with some wanting to be part and other wanting nothing to do with it. I have the feeling the same will apply to the nations I will visit during the Challenge.
Since the challenge took to the road from Poznan I have been surprised that I have managed to continually do the miles day after day and arrive here on time as planned. It was all maybe a bit straight forward. Dare I even say easy! But of course each day there was a new challenge. From the off in Poznan the sun beat down on me like I had never experienced before on the bike. Then in Lithuania and Latvia they offered me some tough roads with a lack of surfaced roads. Russia followed this up with roads almost as bad as their driving. The language barrier has been huge imprisoning me in a world of silence. But you get on with it.
The motivation to get here was maybe the key. As far as I can work out for me fitness only plays a very small part in the ability to achieve the goal. For me it appears to be more about the mental attitude to the situation. The facts are simple prior to the expedition I had very little time to train. By that I really mean very little at all. Yet here I am. How much further this will get me I can’t say.
I will find out on the road. I have chosen the best time to find out, during the first ever race I have ever participated in. Sure there are no other competitors, strict rules or prize for finishing. But I am against the clock. It is counting down to October 14th and the Glasgow handover ceremony at the Delhi Commonwealth Games. From here to there it is some 3400 miles and I have just under 50 days to get there.
So can I do? Well it is time to find out. Delhi here I come….
…….oh and remember wear Sun cream!
Posted by Sean Newall at 14:35 No comments:

Labels: Cycling around the world, Cycling in Moscow, Cycling in Russia, the commonwealth Challenge

The crossing from Harwick to the hook of Holland was a straight forward journey. From there on it was a case of learning how to use the bike roads. But to be fair the first 700 miles have been mostly straight forward. A few navigations problems and problems finding somewhere to camp aside. As you would expect.

It has been a little dissappointing being wet nearly everyday and took a bit of getting used to. But now I expect it. Not quite the summer I thought that I was going to be chasing though!

Now I complained about the cycle roads a lot to begin with. I actually found them hard to navigate. This is the first place that I have come across in the world that has such fully developed facilities for bicycles. From the Holland to Poland I must of cycled nearly three quarters of the distance on these roads. No cars, very few bicycles and in general a good surface.

Though I was never too fond of the bumpy red brick sections in towns. Also I couldn't understand why they went to the bother of making these paths and not lowering the kerbs properly? The time that a car almost hit me at a junction wasn't great either. It resulted in the crown jewels making a very hard contact with the top bar. The price I made for not letting a car hit me! To be fair the driver did the right thing by apologising and laughing at my pain like anyone would do in that situation.

So maybe it is an idea that could catch on. The only problem I had was when I would ride on roads to bypass a town. The bike paths would always take a longer route through towns which after seeing a few housing estates the appeal of avoiding them on the road grew. This quite often led to abuse from drivers. Good for learning German swear words though. But the further east I went the less a problem this seemed but I think that was me just getting better at navigating in Germany. So maybe the abuse was due.

Germany is without doubt the greenest country that I have visited to date. From the first morning of riding in Germany until arriving in Poland no matter which direction that you were to look you would see a wind turbine. There were that many of them that I even had to camp underneath one of the beasts. I felt like I was on a beach beside the sea. Each swoosh of the blades sounding like a gentle wave rolling on to a golden beach. It made for a good night sleep.

I have lost track of time and now work out days by miles. Today 80 tomorrow 100 and so on. Although each day is exactly the same: pedal, stop eat, pedal, stop eat, camp and sleep. Each day is of course different as the further I chase my shaddow around the world the greater the cultural differences from home become.