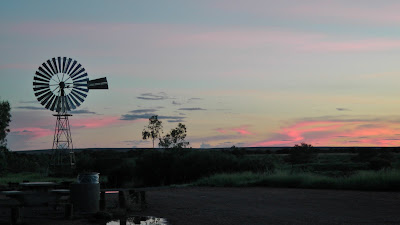 I haven't managed to get one of these done since leaving Darwin. That was over a month now. The onwards journey from there resulted in a rather miserable time for me. Not so much in a physical sense but very much the psychological aspect of the challenge. I am quite sure if I was in there by myself for any longer I wouldn't have come out right in the head.

It was all the time spent alone. It was near 90% just me and Kirsty for 7 weeks. Kirsty might be a good machine for covering the miles but she doesn't really have that much to say to me. Well I suppose I should be happy she didn't start talking to me. I was delighted to talk to any one that would stop but bearing in mind that I didn't get near a shower very often and I had a lip disease that had blood and puss oozing out; resulted in rather short chats. 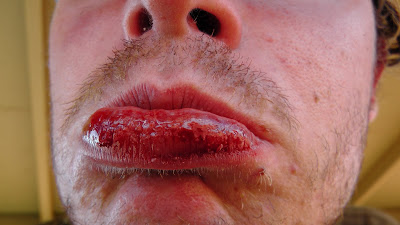 When the Bush broke my I-pod, my only source of entertainment (I don't have any books, guides or even maps) I just stopped for the day. I could not continue. I had become dependent on it and hadn't realised. Audio books were my new friends. The talked to me and made my laugh. With this gone all I was left with was food packets and the odd tourist information sign to distract my mind from the heat, humidity, headwinds, flies, mosquitoes, storms, rain and the rest of the armoury that the bush has at its disposal to kill me. 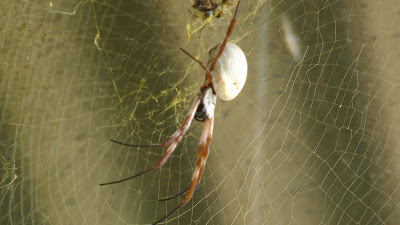 The night I found a children's book on a bench at a rest area was a particular highlight. The adventure of Lola and her tea parties enthralled me for at least 40 minutes as I read it cover to cover (more than once). Up till then I was occupying my mind by comparing food contents between the jam, bread and occasional can of beans. "Oh this has flavour 126 in it just like that jam from the other day" I would often find myself thinking. The challenges of the distance, the never ending straight road, the never changing shade of green, of the 2000 mile long mono bush were just the tip of the iceberg. Being in Australia for the wettest summer since records began, was maybe the main source for all the problems. The rain changed the bush and turned it green. So when I was expecting to see landscapes described as looking like the 'moon', all I seen were fields of grass. Funnily enough just like the ones at home.

I got hit by the tail end of that cyclone and rather foolishly felt that it was perfectly acceptable cycling weather. Turns out that riding in storms like that is quite an intense experience. Really you shouldn't be close enough to lightning for it to temporally blind and for the sound of thunder to come in stereo as the noise of the skies unzipping passing from the right ear to the left. Lesson learnt the hard way again. When a local says the rains coming, they mean it. I was genuinely scared by this and paid much closer attention to the skies from then on. Well at least they changed every day, unlike the road ahead.

The flies oh don't get me started on the flies. They were a particular nuisance. I know I went on about this last time but there attacks and biting just increased. This was a result of the rain. More rain meant more biting bugs. I was sure this was yet another mental challenge set by the bush. I could do very little to prevent the attacks. I felt I had been moved to the bottom of the food chain. My only purpose in life was to be a landing spot and a food source.

Near the end of my time in the Bush my fly tennis had improved to a one in three hit rate. I was sure I was ready to move on to the chop sticks. It was the noise though that i found the hardest. For some reason they would always go for my ears. Baazip, Baaaazzzip, Baazip, Baaaazzzip. Over and over and over. It got louder and louder and louder. My hatred for this was only replaces by my increasing fear of the mosquitoes. Clouds would form over my tent. Taking every opportunity to invite themselves in for dinner. As soon as I got in the tent the task of killing the unwanted guested would be begin. As a rule as soon as I was in the tent I wouldn't leave it till I was riding again.

The last few days of having to get off andpush the bike out the bush to Port Augusta had me near to tears. It was demoralising I had taken enough and wasn't sure if I wanted to continue. It was at this point that the bush decided that it was time to give me the strongest headwind that I have ever experienced. I had put in as much effort as I could to cover the distance in as quick a time as I could. But the harder I pushed into the bush the harder it got.

For three solid days this went on for. I was beaten. If it wasn't for the warm welcome I received in Adelaide I really do wonder if I would have continued. 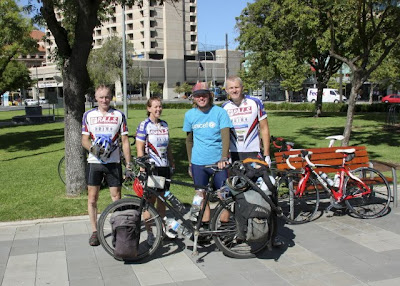