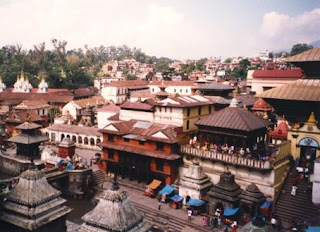 The morning after the night in prison I had finally made it to Nepal. There was no strike problem stopping me from entering this time. The riots were over for the time being. Almost instantly - as is the norm when crossing borders- everything changed. The flat plains of crop growing fields of India rapidly transformed into an undulating terrain covered by forest. The roads started off good and the people were even friendlier. For the first time in weeks the women were talking again. I was on my last push with only another few hundred miles and me and Pinny would make it to the fabled city of Kathmandu!

I had one more night out in the tent before Kathmandu in Bardia National park. I was quite uneasy with it. Firstly due to the stories from the gov’ner the night before of foreigners getting stabbed and secondly I had just found out that Nepal has bears in their national parks. I remember being terrified of bears on the cycle expedition I had just recently completed with the cycling for charity team from Ljubljana to Istanbul. The thought of encountering one out in this jungle filled me with fear. What was it I was to do if this happened? Make a loud noise, lie down, throw rocks at it or maybe beside it. I really didn’t know.

It turned out to be an uneventful night. No man or beast had disturbed my sleep and I didn’t even have a crowd stop and stare in the morning. I was actually a little disappointed. So the stage was set for the last 135 miles. I was going to make it to a nice hotel and a hot shower in Kathmandu. That was my motivation. The day was bright and warm; the roads were quiet and easy. As I entered a valley following a turquoise river for mile after mile over rolling hills I was happy. Pinny was in good shape and I was feeling great if not just a little tired.

Then the last day turned to night. I was within 40 miles of Kathmandu. The road turned from easy to extremely difficult. The blacktop surface deteriorated rapidly to a tarmac warzone. Trench size pot holes hampered my already slowed progress and fastened my worsening mood. It was this hill; a hill I didn’t know existed that was the source of my foul mood. “Why had my hand drawn map not warned me of this dam monster of a hill?” I cursed and made a note to draw better maps in the future.

Due to the nightly ritual of burning rubbish and the inability of drivers in this part of the world to flick off their full beam lights the view ahead was very limited. It was also at this point I decided to have my first ever crash on a tour. Well more of a fall really. I was still heading uphill and I was pushed to the sand covered bank at the road side by a truck. Pinny’s wheels lost all traction and skidded out from underneath me and I toppled on to the hard tarmac below me. If it wasn’t for the truck driver’s fast reactions behind me then I would have been under its wheels. It was also lucky that at that point there wasn’t a truck coming down the hill. Now that would have caused quite an accident. I picked up Pinny, checked myself and continued up. I was a little shaken but otherwise okay.

Nearly two and a half hours later I had reached the top. The dirt trail that had substituted as the main road had finally topped out. I had made it 900 miles in ten days. Below was the Kathmandu valley. I was exhausted but elated and all I had to do was roll into town. Well so I thought. As always is the case there seemed to be one more challenge! In this case it was the welcoming party that Kathmandu had arranged for me. It was dogs, packs of crazy bike chasing dogs. Pinny and I don’t get on well with dogs. I was furious.

I hurtled down the dark downhill at full speed. I did not want to get to know these dogs personally. Out running them was my best option. As soon as I out ran one group another would join the chase. If this was during the day it would not have been a problem. I could have seen and avoided any pot hole with ease. But it was night; Nepal doesn’t do street lighting and pot holes were a danger as real as the dogs and were going to be inevitable. But I never hit any. I was like a Jedi cyclist. I knew which route to instinctively take. I flew past dogs and pot holes none affecting me. I picked up speed and soon the city was within reach.

Finally I had just out run the last pack of dogs for the night. Surely nothing else could go wrong I now thought. I was using the force after all. Confident I kept up the downhill charge and all my attention was focused on finding a hotel. Food, beer, a shower and a warm room were all so close. Then to my surprise I hit the largest pothole I have ever experienced. I almost disappeared into it. The resulting collision had terrible consequences for Pinny.

The rack holding my pannier bags came flying off. It swung around on the lower fittings that was still attached to the bike and crashed into the gears. The force of this collision had destroyed the gearing system. At this point I was too tired to consider the consequences or even inspect Pinny properly. For some reason I was more concerned that I might get robbed. This was strange considering I had nothing to base these thoughts on. So on the very last few miles Pinny had been mortally injured and it was not repairable. I patched up the rack and limped into the city in search of a hotel.

With the help of an army escort (don’t even ask), the same ones that caused all the problems in the country, I was guided to a hotel. But effectively my attempt to cycle to Everest Base camp was over. Without Pinny this plan was on hold. It was time for a new plan.